William Jennings Bryan Herman (July 7, 1909 – September 5, 1992) was an American second baseman and manager in Major League Baseball (MLB) during the 1930s and 1940s. Known for his stellar defense and consistent batting, Herman still holds many National League (NL) defensive records for second basemen and was inducted into the National Baseball Hall of Fame in 1975.

Born in New Albany, Indiana, in 1909, and named after William Jennings Bryan, the three-time Presidential candidate and statesman of the turn of the 20th century,[1] Herman attended New Albany High School.

Herman broke into the majors in 1931 with the Chicago Cubs and asserted himself as a star the following season, 1932, by hitting .314 and scoring 102 runs. His first at-bat was memorable. Facing Cincinnati Reds pitcher Si Johnson, Herman chopped a pitch into the back of home plate, which then bounced up and hit Herman in the back of the head, knocking him out.[2] A fixture in the Chicago lineup over the next decade, Herman was a consistent hitter and solid producer. He regularly hit .300 or higher (and as high as .341 in 1935) and drove in a high of 93 runs in 1936.

A 1933 Goudey baseball card of Herman.

Herman missed the 1944 and 1945 seasons to serve in World War II, but returned to play in 1946 with the Dodgers and Boston Braves (after being traded mid-season). At 37, he was considered prime managerial material by the new owners of the Pittsburgh Pirates. On September 30, 1946, Herman was traded to Pittsburgh with three marginal players (outfielder Stan Wentzel, pitcherElmer Singleton and infielder Whitey Wietelmann) for third baseman Bob Elliott and catcher Hank Camelli. Herman was promptly named playing manager of the 1947 Pirates, but he was aghast at the cost—Elliott—the Pirates had paid for him. «Why, they’ve gone and traded the whole team on me», he said.[3] Elliott won the 1947 NL Most Valuable Player award and led Boston to the 1948 National League pennant. Herman’s 1947 Pirates lost 92 games and finished tied for seventh in the NL, and he resigned before the season’s final game. (His last appearance as a Major League player was on August 1 of that year.)

Herman then managed in the minor leagues and became a Major League coach with the Dodgers (1952–57) and Braves (now based in Milwaukee) (1958–59)—serving on five National League pennant winners in eight seasons. Then he moved to the American League (AL) as the third-base coach of the Boston Red Sox for five years (1960–64), before managing the Red Sox to lackluster records in 1965 and 1966; his 1965 Boston club lost 100 games. After his firing by the Red Sox in September 1966, he coached for the California Angels (1967) and San Diego Padres(1978–79) and served in player development roles with the Padres and Oakland Athletics. 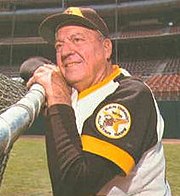