Thomas Charles Lasorda (born September 22, 1927) is an American former Major League Baseball pitcher, coach, and manager, who is best known for his two decades managing the Los Angeles Dodgers. In 2018, he marked his 69th season with the Brooklyn/Los Angeles Dodgers organization, the longest tenure anyone has had with the team, edging Dodger broadcaster Vin Scully by three seasons. He was inducted into the National Baseball Hall of Fame as a manager in 1997. Since the death of Red Schoendienst in June 2018, he has been the oldest living Hall of Famer.

Lasorda signed with the Philadelphia Phillies as an undrafted free agent in 1945 and began his professional career that season with the Concord Weavers of the Class D North Carolina State League.[1] He then missed the 1946 and 1947 seasons because of a stint in the United States Army. He served on active duty from October 1945 until spring 1947.

He returned to baseball in 1948 with the Schenectady Blue Jays of the Canadian–American League. On May 31, 1948, he struck out 25 Amsterdam Rugmakers in a 15-inning game, setting a professional record (since broken), and drove in the winning run with a single.[2] In his next two starts, he struck out 15 and 13, gaining the attention of the Dodgers, who drafted him from the Phillies chain and sent him to the Greenville Spinners in 1949. Lasorda also pitched for the Cristobal Mottas in the Canal Zone Baseball League in Panama from 1948 through 1950, winning the championship in 1948. Lasorda played for Almendares (Cuba) in 1950–1952 and 1958–1960, compiling a 16–13 record in four seasons, including 8–3 with a 1.89 ERA in 1958–1959. Lasorda made his major league debut on August 5, 1954, for the Brooklyn Dodgers.

He made his only start for the Dodgers on May 5, 1955 but was removed after the first inning after tying a Major League record with three wild pitches in one inning and being spiked by Wally Moon of the St. Louis Cardinals. He was demoted after the game and never pitched for the Dodgers again.[3] Though he did not play in the 1955 World Series, he won a World Series ring as a member of the 1955 Brooklyn Dodgers.

He pitched for the Dodgers for two seasons, then for the Kansas City Athletics for one season after the Athletics bought him from the Dodgers. Kansas City traded Lasorda to the New York Yankees in 1956. He appeared in 22 games for the Triple-A Denver Bears in 1956–1957, and then was sold back to the Dodgers in 1957. During his brief tenure with the Bears, Lasorda was profoundly influenced by Denver skipper Ralph Houk, who became Lasorda’s role model as an MLB manager.

«Ralph taught me that if you treat players like human beings, they will play like Superman,» he told Bill Plaschke in the biography, I Live for This: Baseball’s Last True Believer. «He taught me how a pat on a shoulder can be just as important as a kick in the butt.»[4]

Lasorda was first optioned to the Montreal Royals of the International League in 1950. He also played winter baseball for Almendares (Cuba) in 1950–1952 and 1958–1960, compiling a 16–13 record in four seasons, including 8–3 with a 1.89 ERA in 1958–1959. He pitched for Montreal in 1950–1954 and 1958–1960 and is the winningest pitcher in the history of the team (107–57) (Lasorda was sent back down to Montreal in 1954 after the Dodgers were forced to keep a young Sandy Koufax on their roster due to the Bonus Rule. He later joked that it took Koufax to keep him off the Dodger pitching staff). He led Montreal to four straight Governors’ Cups from 1951 to 1954, and a fifth one in 1958. On June 24, 2006, he was inducted into the Canadian Baseball Hall of Fame.[5] He played only in the minors for the Yankees, and the Dodgers returned him to the Montreal team, where he was voted the International League’s Most Valuable Pitcher in 1958, when he won his fifth minor league championship. The Dodgers released him on July 9, 1960.

Lasorda’s first off-field assignment with the Dodgers was as a scout from 1961 to 1965. In 1966, he became the manager for the Pocatello Chiefs in the rookie leagues, then managed the Ogden Dodgers to three Pioneer League championships from 1966 to ’68. He became the Dodgers’ AAA Pacific Coast League manager in 1969 with the Spokane Indians (1969–1971). He remained manager of the AAA team when the Dodgers moved the farm club to the Albuquerque Dukes (1972). His 1972 Dukes team won the PCL Championship. Lasorda was also a manager for the Dominican Winter Baseball League team Tigres del Licey (Licey Tigers). He led the team to the 1973 Caribbean World Series title in Venezuela with a series record of 5 wins and 1 loss.

In 1973, Lasorda became the third-base coach on the staff of Hall of Fame manager Walter Alston, serving for almost four seasons.[6] He was widely regarded as Alston’s heir apparent, and turned down several major league managing jobs elsewhere to remain in the Dodger fold. He also returned to the third-base coach’s box on a temporary basis while managing the Dodgers.

Manager of the Dodgers 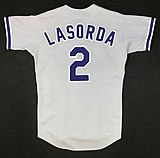 His 16 wins in 30 NL Championship games managed were the most of any manager at the time of his retirement. His 61 postseason games managed ranks fourth all-time behind Bobby Cox, Casey Stengel (all of whose games took place during the World Series in baseball’s pre-divisional play days), and Joe Torre. He also managed in four All-Star games.

Lasorda managed nine players who won the National League Rookie of the Year award. The winners came in two strings of consecutive players. From 1979 to 1982, he managed Rick Sutcliffe, Steve Howe, Fernando Valenzuela, and Steve Sax. From 1992 to 1995, he managed Eric Karros, Mike Piazza, Raúl Mondesí, and Hideo Nomo. Before retiring during the 1996 season, he had also managed that year’s rookie of the year, Todd Hollandsworth.

He was inducted into the Baseball Hall of Fame in 1997[8] as a manager in his first year of eligibility. The Dodgers retired his uniform number (2) on August 15, 1997[9] and renamed a street in Dodgertown as «Tommy Lasorda Lane». In 2014, a new restaurant named «Lasorda’s Trattoria» opened at Dodger Stadium.

Lasorda came out of retirement to manage the United States team at the 2000 Summer Olympics in Sydney, Australia.[10] He led the Americans to the gold medal, beating favored Cuba, which had won the gold medal at the two previous Olympics. In doing so, he became the first manager to win a World Series championship and lead a team to an Olympic gold medal.

Lasorda coached the 2001 All-Star Game as third base coach. While at the plate, Vladimir Guerrero lost his bat while swinging, and it flew towards Lasorda, causing him to fall backwards, but Tommy was unharmed.[11] As a joke, Giants outfielder Barry Bonds gave Lasorda a chest protector to wear while manning the third-base coaching box.

During spring training in 2008, the Dodgers were invited to play a series of exhibition games in Taiwan. Dodger manager Joe Torre took a group of players with him for that series. The majority of the team remained behind in Florida to finish out the Grapefruit Leagueseason. Lasorda briefly came out of retirement to manage the team that remained in Florida while Torre was away.[12]

An unnamed Dodger executive came up with the idea of having Dodger manager Don Mattingly ask Lasorda to be an honorary coach on Lasorda’s 84th birthday against the San Francisco Giants.[13] 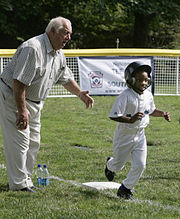 Tommy Lasorda was named Vice-President of the Dodgers upon his retirement from managing in 1996. On June 22, 1998 he became the Dodgers interim General Manager upon the mid-season firing of Fred Claire. He resigned as General Manager after the season and was appointed as Senior Vice-President of the Dodgers. After the sale of the team to Frank McCourt, Lasorda took on his current position of Special Advisor to the Chairman where his responsibilities include scouting, evaluating and teaching minor league players, acting as an advisor and ambassador for the Dodgers’ international affiliations, and representing the organization at more than 100 speaking engagements and appearances to various charities, private groups and military personnel each year.[16]

Lasorda was famous for his colorful personality and outspoken opinions regarding players and other personnel associated with baseball. He had a number of obscenity-filled tirades, some of which were taped and became underground classics, like his explosion over Kurt Bevacqua. [18] The most famous of these is his «Dave Kingman tirade» in 1978, in which Lasorda ranted at reporter Paul Olden, who asked him about Kingman hitting three home runs against the Dodgers that day.[19]

In 1996, he voiced the role of Lucky Lasorta, a Rough Collie commentating the baseball game in the film Homeward Bound II: Lost in San Francisco. He made a cameo appearance in the movie Ladybugs (1992) alongside Rodney Dangerfield. Lasorda portrayed the Dugout Wizard in the syndicated children’s television show The Baseball Bunch.[20] His other television credits playing himself include Silver Spoons, Who’s The Boss?, CHiPs, Hart to Hart, Fantasy Island, Hee Haw, Simon & Simon, Everybody Loves Raymond and American Restoration.

Lasorda partially owned the food company Lasorda Foods, which was known primarily for pasta sauces that Lasorda stated were based on a family recipe passed down to his wife, Jo.[21] In September 1989, the company became a wholly owned subsidiary of the Denver firm Discovery Capital Corp, of which Lasorda continued to own 10%.[22] The parent company through which Lasorda maintained his stake in the Lasorda Foods, Lasorda Foods Holding Corp Inc., was initially based in Fountain Valley, California, before moving to Irvineand then Paramount. A Boca Raton, Florida-based company, Modami Services, acquired Lasorda Foods Holding Corp Inc. in August 1993. Lasorda and Lasorda Foods President Steven Fox, who together owned a majority of Lasorda Foods’ stock, were paid in Modami shares.[21]

In June 2005, President George W. Bush asked Lasorda to serve as a delegate to the U.S. National Day at the World Exposition in Aichi, Japan.[23] In 2008, the government of Japan conferred the Order of the Rising Sun, Gold Rays with Rosette, which represents the fourth-highest of eight classes associated with the award. The decoration was presented in acknowledgment of his contributions to Japanese baseball.[24]

Lasorda became a local celebrity in the Dominican Republic due to his many visits in search of young baseball talents in this land of many famous players in the major leagues, especially after becoming a devoted fan of the «chicharrones» (deep fried pork skins) commonly sold on the streets of the Villa Mella neighborhood of Santo Domingo.[citation needed]

With the death of Red Schoendienst on June 6, 2018, Lasorda is the oldest living Hall-of-Famer.