Brooks Calbert Robinson Jr. (born May 18, 1937) is an American former professional baseball player.[1][2] He played his entire 23-year major league career for the Baltimore Orioles (1955–1977), which still stands as the record for the longest career spent with a single team in major league history (tied with Carl Yastrzemski).[1] He batted and threw right-handed, though he was a natural left-hander.[3] Nicknamed «The Human Vacuum Cleaner» or «Mr. Hoover«,[4] he is considered the greatest defensive third baseman in major league history.[5] He won 16 consecutive Gold Glove Awards during his career,[6] tied with pitcher Jim Kaat for the second-most all-time for any player at any position. Robinson was elected to the Baseball Hall of Fame in 1983.[4]

Robinson was born in Little Rock, Arkansas, to Brooks Calbert and Ethel Mae (née Denker) Robinson.[7] His father worked for Colonial Bakery in Little Rock and later became a captain with the Little Rock Fire Department.[8]His mother worked for Sears Roebuck & Company and then in the controller’s office at the state capitol.[9] His father played second base for a semi-pro team.[10] Young Brooks Robinson Jr., delivered the Arkansas Gazette on his bicycle[11] and also operated the scoreboard and sold soft drinks at Lamar Porter Field.[12]

After he graduated from Little Rock High School on May 27, 1955, where he was scouted for the Arkansas Razorbacks baseball program in Fayetteville,[13][14] he played in the winter baseball leagues in South America in 1955 and in Cuba in 1957. In the offseason of 1956–1957, and then again in 1958, he attended two winter semesters at Little Rock University, majoring in business. He went into the army in 1959,[15] joining the Arkansas National Guard right before he was to be drafted into the United States Army.[14]

Robinson was signed by the Orioles as an amateur free agent in 1955.[16] He made his first appearance on September 17, 1955 at Memorial Stadium against the Washington Senators, batting 6th in the lineup. He went 2-for-4 with an RBI, singling in the 4th off Chuck Stobbs for his first hit while driving in a run on a single in the eighth inning in the 3-1 win. [17] In 1964, Robinson had his best season offensively, hitting for a .318 batting average with 28 home runs and leading the league with 118 runs batted in, winning the American League Most Valuable Player Award.[1][18] In the American League MVP voting, he received 18 of the 20 first-place votes, with Mickey Mantlefinishing second.[18] In 1966, he was voted the All-Star Game Most Valuable Player, and finished second to teammate Frank Robinson in the American League Most Valuable Player Award voting, as the Orioles went on to win the 1966 World Series against the Los Angeles Dodgers.[19][20][21][22]

In the 1970 post-season, Robinson hit for a .583 batting average in the 1970 American League Championship Series against the Minnesota Twins.[23] In the 1970 World Series against the Cincinnati Reds, Robinson had a .429 batting average with 2 home runs;[23] however, it was his defensive prowess at third base that stood out, making several impressive plays during the series that robbed the Reds of apparent base hits.[24][25] His performance won him the World Series MVP Award presented by SPORT,[19] as well as the Hickok Belt as top professional athlete of the year.[26] After the 1970 World Series, Cincinnati Reds manager Sparky Andersonquipped, «I’m beginning to see Brooks in my sleep. If I dropped this paper plate, he’d pick it up on one hop and throw me out at first.»[27]

In his playing career, Robinson was selected for the All-Star team in 15 consecutive years (1960–74) and played in four World Series.[1] He compiled a .267 career batting average with 2,848 hits, 268 home runs and 1357 runs batted in.[1] in 39 postseason games, he batted .303 with 5 home runs and 22 RBI.[1] Robinson led the American League in fielding percentage a record 11 times, and at the time of his retirement, his .971 career fielding average was the highest ever for a third baseman.[28] His totals of 2870 games played at third base, 2697 career putouts, 6205 career assists, 8902 career total chances and 618 double plays were records for third basemen at the time of his retirement.[28] Robinson’s 23 seasons with one team set a new major league record, since tied by Carl Yastrzemski. Only Yastrzemski (3308), Hank Aaron (3076) and Stan Musial (3026) played more games for one franchise.[28] Robinson, a slow baserunner, also hit into four triple plays during his career, a major league record. He commented, «I wouldn’t mind seeing someone erase my record of hitting into four triple plays.»[29] He is the first player to start two triple plays in one season, as he did in 1973. Robinson made his final batting appearance on August 5, 1977 at Anaheim Stadium, pinch hitting for Mark Belanger in the top of the eighth inning. He lined out in his one appearance before being replaced by Kiko Garcia. [30] Robinson made his last appearance in the majors eight days later at Memorial Stadium against the Oakland Athletics. He entered as a pinch hitter for Al Bumbry, only to be pinch hit for by Tony Muser. [31]

When the Orioles started their team Hall of Fame, Brooks and Frank Robinson were the first two men inducted. Following his retirement as a player, Brooks began a successful career as a color commentator for the Orioles’ television broadcasts. In 1982, local television WMAR’s on-air news team in Baltimore, Maryland went on strike and picketed the WMAR headquarters for the two months approaching the baseball season. When Robinson refused to cross the picket line, WMAR management reopened the negotiations and the strike ended the next day. 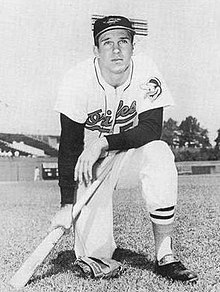 At the conclusion of his final season in 1977, his jersey number 5 was retired by the Orioles.[32] Robinson was elected to the Baseball Hall of Fame in 1983, one of only 16 players to have been honored on the first ballot (not including the five charter members chosen in the first election in 1936).[4] Considered among the greatest all-time Orioles, Robinson and the man usually considered the greatest Baltimore Colts football player, Johnny Unitas, had plaques in their honor in the lobby of Baltimore’s Memorial Stadium. When the Orioles played their last game there on October 6, 1991, Robinson and Unitas were invited to throw out the ceremonial first balls. (Unitas threw a football.) After the conclusion of the game, 119 former Oriole players took the field in the uniforms of their time and stood at their old positions on the field. Robinson was chosen to be the first player to come out.[33]

In 1999, he ranked Number 80 on The Sporting News list of the 100 Greatest Baseball Players, and was elected to the Major League Baseball All-Century Team.[34][35]

A longtime supporter of Scouting, Robinson served for many years on the executive board of the Baltimore Area Council, Boy Scouts of America and is a recipient of the Silver Beaver Award. On December 5, 2006 he was recognized for his accomplishments on and off of the field when he received the Bobby Bragan Youth Foundation Lifetime Achievement Award. On May 16, 2007, Radio Tower Drive, a road in Pikesville, Maryland, was renamed Brooks Robinson Drive in honor of Robinson’s 70th birthday.[36]

On July 2, 2008, the minor league team in York, Pennsylvania, where Robinson got his start, held a ceremony honoring him for being voted as a member on the All-Time Rawlings Gold Glove Team.[37] The award was created by Rawlings and voted by fans to celebrate the golden anniversary of the award.

On October 22, 2011, a statue was unveiled on Washington Boulevard in downtown Baltimore depicting Robinson preparing to throw out a runner at first base. Robinson was present for the unveiling of the statue and commented that it «gave him more hair than he deserved». The statue weighs more than 1,500 pounds (680 kg), is dark gray in color with the exception of a gold colored fielders’s baseball glove, and is located about 300 yards (270 m) away from the Camden Yards statue of Babe Ruth.[38]

On September 29, 2012, the Orioles unveiled a larger-than-life bronze sculpture of Robinson at Oriole Park at Camden Yards as part of the Orioles Legends Celebration Series during the 20th anniversary of the ballpark.[39][40] The unveiling had been previously scheduled to be on May 12, 2012, but had to be rescheduled due to Brooks still slowly recovering after falling off a stage on January 27, 2012.[41]

In 2015, Robinson was selected as one of the Orioles Franchise-Four, recognizing the four greatest players in Orioles history, along with Jim Palmer, Frank Robinson and Cal Ripken Jr. 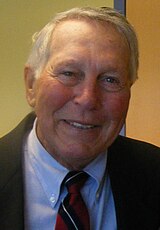 Robinson is one of the investors in the Opening Day Partners group, which owns four teams in the Atlantic League of Professional Baseball. The group named Brooks Robinson Plaza at the entrance of PeoplesBank Park in York, Pennsylvania, in his honor. In the 1970s, Robinson published an autobiography, Third Base is My Home.

He met his future wife, Constance Louise «Connie» Butcher,[7] on an Orioles team flight from Kansas City to Boston in July 1959, where she was working as a flight attendant for United Airlines. He was so smitten with her that he kept ordering iced teas from her. Some of his teammates encouraged him to go talk to her.[8] After drinking his third glass, he returned it to her in the galley. There he told her: «I want to tell you something. If any of these guys, the Baltimore Orioles, ask you for a date, tell ‘em you don’t date married men. Understand? I’m the only single guy on the team.» Before the plane landed in Boston the two had made a date to go out. He was not the only bachelor on the flight.[42] Brooks and Constance were married in her hometown of Windsor, Ontario, Canada on October 8, 1960.[43] Raised a Methodist, in 1970 Robinson converted to Catholicism, his wife’s faith.[44][45]

On March 31, 2011, Robinson was admitted to Greater Baltimore Medical Center for emergency surgery after he developed an infection and fever.[46] In the two weeks he spent in the hospital, he received an outpouring of letters and well-wishes from fans around the country.[47] He was also successfully treated for prostate cancer in 2009.

In April 2014, it was reported that Robinson was seeking a multi-million dollar settlement with the Seminole Indian tribe related to injuries he suffered after a 2012 fall from a stage at Seminole Hard Rock Hotel and Casino in South Florida.[48]