Bert Blyleven (born Rik Aalbert Blijleven, April 6, 1951) is a Dutch American former professional baseball pitcher who played from 1970 to 1992. A renowned curveball pitcher, Blyleven was a two-time All-Starand World Series champion. He ranks fifth all-time among pitchers in strikeouts, 14th in innings pitched, and 27th in wins. He was inducted into the Baseball Hall of Fame in 2011. Currently, he is the color commentator for the Minnesota Twins on Fox Sports North.

Blyleven was born in the Netherlands but was raised in Garden Grove, California where he attended Santiago High School. His father moved the family to Melville, Saskatchewan when Blyleven was two years old,[1]and he then moved his family back to Southern California when Blyleven was five years old. He became interested in baseball as a young boy watching Sandy Koufax pitch for the Los Angeles Dodgers and listening to Vin Scully and Jerry Doggett announce the Dodgers’ radio broadcasts. Blyleven was quoted as saying, «My dad built me a mound in the backyard with a canvas backdrop over our horseshoe pits, and I would go back there and just throw and throw and throw until I developed it, and it became my curveball. And I could throw it over at any time, any count.» [2]

Blyleven starred on the Santiago High School baseball team, also running cross country to build up his stamina and leg strength. He was drafted straight out of high school by the Minnesota Twins in the third round in 1969 after just 21 minor league starts, he found himself called up to the Majors at age 19 on June 2, 1970. In his first season, his sharp curveball helped him to ten victories, and he was named AL Rookie Pitcher of the Year by The Sporting News. In 1973, he pitched nine shutouts, the most of any AL pitcher that season.

However, Blyleven’s early career with the Twins was not always pleasant as he was hounded by critics and fans.[3]Unhappy with his salary there, Blyleven was traded (along with teammate Danny Thompson) to the Texas Rangers in a six-player deal on June 1, 1976.[4] He pitched well with the Rangers, posting a 2.76 ERA. On September 22, 1977, just two weeks after being sidelined with a groin injury, Blyleven no-hit the California Angels 6–0 at Anaheim Stadium. The no-hitter was his final start as a Ranger; not until Cole Hamels during the 2015 season would a pitcher be traded after pitching a no-hitter in his most recent start for the team that traded him. His 2.74 career ERA with the Rangers remains the best in team history.[5]

Following an incident in which Blyleven blatantly gave the finger to a television camera obviously focused on him during one of the Rangers’ rare nationally broadcast games,[6] he was dealt to the Pittsburgh Pirates in the first four-team blockbuster deal in Major League Baseball history on December 8, 1977 that also involved the Atlanta Braves, New York Mets and a total of 11 players changing teams. The Pirates also acquired John Milner from the Mets. The Rangers received Al Oliver and Nelson Norman from the Pirates and Jon Matlack from the Mets. Adrian Devine, Tommy Boggs and Eddie Miller were traded from the Rangers to the Braves. The Mets got from the Braves Willie Montañez and from the Rangers Tom Grieve and Ken Henderson who was sent to New York to complete the transaction three months later on March 15, 1978.[7][8] With the Pirates, he led the team in ERA, strikeouts, and complete games in 1978, and he helped them to a World Series victory in 1979. His 20 no decisions in 1979 are the most by an MLB starting pitcher in a season, dating back to at least 1908.[9] 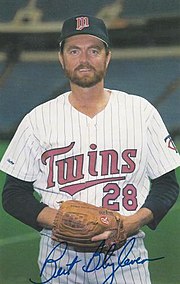 Blyleven became disgruntled with the Pirates and threatened to retire during the 1980 season if he was not traded.[10] The Pirates traded him to the Cleveland Indians on December 9, 1980. Blyleven sat out most of the 1982 season with an elbow injury and struggled again in 1983, but he came back in 1984 with one of his best seasons: a 19–7 record with a 2.87 ERA. He missed a second 20-win season that year when he was forced to miss a couple of starts after breaking his foot when joking around in the bullpen. In 1985 he again led the American League in shutouts with five. That year, he pitched 293.2 innings and completed 24 games, a feat that has not been repeated since.[11] Blyleven was unhappy playing for the lackluster Indians and forced a trade back to the Twins,[12] where he passed the 3,000-strikeout mark and helped the Twins to a 1987 World Series victory.

Blyleven’s first two full seasons back with the Twins produced major league records for home runs allowed in a single season (50) and in back-to-back seasons (96). He never surrendered more than 24 home runs in any year before, and after the 1986–87 campaigns, he averaged 21 allowed homers per season over the course of his career.

Blyleven went to the California Angels in 1989 and pitched a 2.73 ERA for a 17–5 record in his first season; he led the league for his third and final time in shutouts (5). Blyleven missed the entire 1991 season following rotator cuff surgery. He came back in 1992 but was mostly unproductive, going 8–12 with a 4.74 ERA. He retired following that season with a career 287–250 record with 3,701 strikeouts and a 3.31 ERA. (Only 16 other pitchers have at least 3,000 career strikeouts.) He tried out for the Twins again in the spring of 1993, but did not make the squad, which made his retirement official. He pitched for the MLB All-Stars in the 1993 World Port Tournament in Rotterdam.[13]

MLB Hall of Fame third baseman Brooks Robinson said of Blyleven: «[his curveball] was nasty, I’ll tell you that. Enough to make your knees buckle. Bert was a terrific pitcher—a dominating pitcher.»[14]

Blyleven was a pitching coach for the Netherlands in the 2009 World Baseball Classic.[15]