From Wikipedia, the free encyclopedia.

The film was announced after The Walt Disney Company‘s acquisition of Lucasfilm in October 2012, and was the first Star Wars film to not extensively involve franchise creator George Lucas, who only served as a creative consultant in the early stages. The film was produced by Abrams, his longtime collaborator Bryan Burk, and Lucasfilm president Kathleen Kennedy. Abrams and Lawrence Kasdan, co-writer of the original trilogy films The Empire Strikes Back (1980) and Return of the Jedi (1983), rewrote an initial script by Michael Arndt. John Williams, the composer for the previous six films, returned to compose the film’s score. Filming began in April 2014 in Abu Dhabi and Iceland, with principal photography also taking place in Ireland and at Pinewood Studios in England, and wrapped in November 2014.Star Wars: The Force Awakens (also known as Star Wars: Episode VII – The Force Awakens) is a 2015 American space opera film produced, co-written and directed by J. J. Abrams. It is the first installment in the Star Wars sequel trilogy, following the story of Return of the Jedi (1983), and is the seventh episode of the nine-part «Skywalker saga«. It was produced by Lucasfilm and Abrams’s production company Bad Robot Productions, and was distributed by Walt Disney Studios Motion Pictures. The film’s ensemble cast includes Harrison Ford, Mark Hamill, Carrie Fisher, Adam Driver, Daisy Ridley, John Boyega, Oscar Isaac, Lupita Nyong’o, Andy Serkis, Domhnall Gleeson, Anthony Daniels, Peter Mayhew, and Max von Sydow. Set 30 years after Return of the Jedi, The Force Awakens follows Rey, Finn, Poe Dameron, and Han Solo‘s search for Luke Skywalker and their fight in the Resistance, led by General Leia Organa and veterans of the Rebel Alliance, against Kylo Ren and the First Order, a successor to the Galactic Empire.

The Force Awakens was widely anticipated, and Disney backed the film with extensive marketing campaigns. It premiered in Los Angeles on December 14, 2015, before its wide release in the United States on December 18. The film received positive reviews for its screenplay, direction, acting performances (particularly those of Ford, Driver, Ridley, and Boyega), musical score, visual effects, editing, and action sequences, although some critics found it derivative of the original trilogy. The film broke various box office records and became, unadjusted for inflation, the highest-grossing installment in the franchise, the highest-grossing film in North America, the highest-grossing film of 2015, and the third-highest-grossing film of all time (the fourth-highest-grossing film as of December 2019), with a worldwide gross of over $2 billion and a net profit of over $780 million.[6][7] Among films’ box office adjusted for inflation, it is the top-grossing sequel of all time in North America. It received five nominations at the 88th Academy Awards and four nominations at the 69th British Academy Film Awards, where it won the award for Best Special Visual Effects. It was followed by The Last Jedi in 2017 and The Rise of Skywalker in 2019.

Thirty years after the Galactic Civil War, the First Order has risen from the fallen Galactic Empire and seeks to eliminate the New Republic. The Resistance, backed by the Republic and led by General Leia Organa, opposes the First Order. Leia searches for her brother, Luke Skywalker, who has gone missing.

On the desert planet Jakku, Resistance pilot Poe Dameron receives a map to Luke’s location from Lor San Tekka. Stormtroopers commanded by Kylo Ren raid the village and capture Poe, while Kylo kills San Tekka. Poe’s droid, BB-8, escapes with the map and encounters a scavenger named Rey. Kylo tortures Poe using the Force and learns of BB-8. Stormtrooper FN-2187, disillusioned by the First Order, frees Poe, and they escape in a stolen TIE fighter. Upon learning that FN-2187 has no other name, Poe gives him the name «Finn». As they head to Jakku to retrieve BB-8, they are shot down by a First Order Star Destroyer and crash-land. Finn survives and assumes that Poe died in the crash. He encounters Rey and BB-8, but the First Order tracks them and launches an airstrike. Rey, Finn, and BB-8 steal the Millennium Falcon and escape the planet.

The Falcon is discovered and boarded by Han Solo and Chewbacca. Gangs seeking to settle debts with Han attack, but the group escape in the Falcon. At the First Order’s Starkiller Base, a planet converted into a superweapon, Supreme Leader Snoke allows General Hux to use the weapon for the first time. Snoke questions Kylo’s ability to deal with emotions relating to his father, Han Solo, who Kylo states means nothing to him.

Aboard the Falcon, Han determines that BB-8’s map is incomplete. He then explains that Luke attempted to rebuild the Jedi Order but exiled himself when an apprentice turned to the dark side, destroyed the temple, and slaughtered the other apprentices. The crew travels to the planet Takodana and meets with cantina owner Maz Kanata, who offers assistance getting BB-8 to the Resistance. Rey is drawn by the Force to a secluded vault, where she finds the lightsaber once belonging to Luke and his father, Anakin Skywalker. She experiences disturbing visions and flees into the woods, confused and terrified. Maz gives Finn the lightsaber for safekeeping.

Starkiller Base destroys the New Republic and its fleet. The First Order attacks Takodana in search of BB-8. Han, Chewbacca, and Finn are saved by Resistance X-wing fighters led by Poe, who survived the crash. Leia arrives at Takodana with C-3PO and reunites with Han. Meanwhile, Kylo captures Rey and takes her to Starkiller Base, but she resists his mind-reading attempts. Snoke orders Kylo to bring Rey to him. Discovering she can use the Force, Rey escapes using a Jedi mind trick on a guard.

At the Resistance base on D’Qar, BB-8 finds R2-D2, who had been inactive since Luke’s disappearance. As Starkiller Base prepares to fire once more, the Resistance devises a plan to destroy it by attacking the main facility. Using the Falcon, Han, Chewbacca, and Finn infiltrate the facility, find Rey, and plant explosives. Han confronts Kylo and implores him to abandon the dark side. Kylo seems to consider this, but ultimately refuses and kills his father. Devastated, Chewbacca shoots Kylo and sets off the explosives, allowing Poe to attack and destroy the base’s thermal oscillator.

The injured Kylo pursues Finn and Rey into the woods. Finn fights Kylo with the lightsaber to protect Rey before Kylo knocks him unconscious. Rey takes the lightsaber and channels the Force to defeat Kylo in a duel; they are then separated by a fissure as the planet surface begins to splinter. Snoke orders Hux to evacuate and bring Kylo to him to complete his training. Chewbacca rescues Rey and the unconscious Finn, and they escape aboard the Falcon. As the Resistance forces flee, Starkiller Base implodes. On D’Qar, Leia, Rey and Chewbacca mourn Han’s death. R2-D2 awakens and reveals the rest of the map, which Rey uses to find the oceanic planet Ahch-To in the Falcon.

On Ahch-To, Rey finds Luke atop a cliff on a remote island. Without a word, she presents him with his father’s lightsaber. 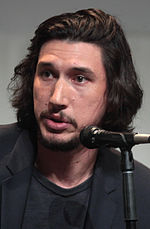 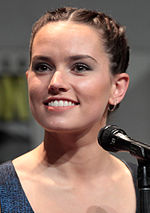 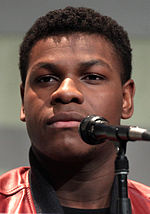 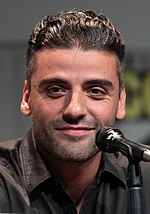 Tim Rose and Mike Quinn reprise their respective roles as Admiral Ackbar and Nien Nunb from Return of the Jedi.[32][33] Kipsang Rotich returns as the voice of Nien Nunb[34] and Erik Bauersfeld returns to voice Ackbar. This was Bauersfeld’s final film role before his death in April 2016.[35] Kenny Baker, originally announced as part of the cast, was credited as «consultant» for R2-D2,[36][37] with Jimmy Vee performing some of the work for R2-D2.[38] Ewan McGregor has an uncredited vocal cameo as Obi-Wan Kenobi in Rey’s vision sequence, while archival audio of Frank Oz, Alec Guinness, Hayden Christensen and Ian McDiarmid as Yoda, Kenobi, Anakin Skywalker and Palpatine, respectively, are also used in the same scene; Oz recorded new dialogue for the film, but it was replaced with preexisting audio from The Empire Strikes Back.[39][40]